TOUR PRICE: (not per person) US$ 975
Price includes an exclusive tour for up to 6 persons. Please note: It is not possible for different private groups to share this tour.
THE PRICE INCLUDES: A Jewish guide for 4,5 hours incl. 1-hour canal tour
STARTING POINT: In front of the Copenhagen Synagogue
STARTING TIME: At your request
TOUR ENDS: After a visit to the Danish-Jewish Museum
ENTRANCE FEES: Not included

On our unique combo tour of Jewish and general sightseeing, the Jewish guide will tell you the amazing story of Danish Jewry, from when the first Jews were invited by the king Christian 4th in 1622, up to present time.

The guide will share his/her personal stories about the miraculous rescue of 7,000 Danish Jews in October 1943 and about Jewish life today.

The Great Synagogue of Copenhagen

Over the years there has been around 33 synagogues and stielbels in Copenhagen. Of course not all of them at the same time. Today only two remain in existence and are being used by the community. The Great Synagogue of Copenhagen, is known for its unique architecture. It has been the main center for Jewish life in Denmark since since 1833. (Synagogue is closed on Fridays and Sundays)

During this tour you will pass many Copenhagen landmarks such as: 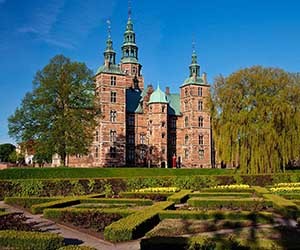 A royal hermitage set in the King’s Garden in the heart of Copenhagen, Rosenborg Castle features 400 years of splendor, royal art, treasures and the Crown Jewels. Rosenborg Castle was built by  Christian IV, in the early 17th century.

The Danish Crown Jewels are the result of the great interest generations of queens and princesses have taken in jewellery and precious stones. 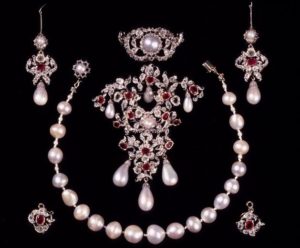 The history of the Crown Jewels begins with Christian VI’s queen, Sophie Magdalene. When she was  widowed in 1746, she expected to die of grief shortly after. She therefore wrote her will, in which she specified, that her jewellery was not to be given to a specific person, but should always be “with the crown”. In that way there would always be the most magnificent jewellery available to the any given queen.

After the visit to Rosenborg Castle we will take a taxi to the pier, where we depart for the 1-hour boat tour. The cost is included in the tour price. 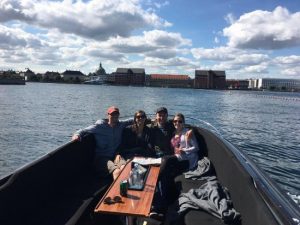 Experience a wonderful homelike atmosphere on a charming boat tour in the canals of Copenhagen, while you enjoy a complementary drink. You are also invited to bring and enjoy your own lunch on board.
Enjoy the charming atmosphere in and around the canals, and meet friendly people from all over the world.

The boat tour ends at the pier of the Royal Library, the Black Diamond, only a few steps away from the Danish Jewish Museum.

Top architect Daniel Libeskind’s characteristic architecture will lead you into the universe of the Danish Jewish culture. The Museum is named ’Mitzvah’ honouring the rescue of most of the Danish Jews during WW2. (Closed on Mondays)

The tour ends after a visit to the Danish-Jewish Museum.

On this combo tour we will see the following key sights:
Copenhagen Canals – The Royal Castle, Amalienborg – The Little Mermaid – Rosenborg Castle – The Black Diamond, The Royal Library  – The City Hall – Copenhagen City Court – The Opera house  – The Copenhagen Synagogue – The Round Tower – The Pedestrian Street “Strøget”  – The Danish Parliament, Christiansborg Palace – The Old Stock Exchange – The Danish Jewish Museum.